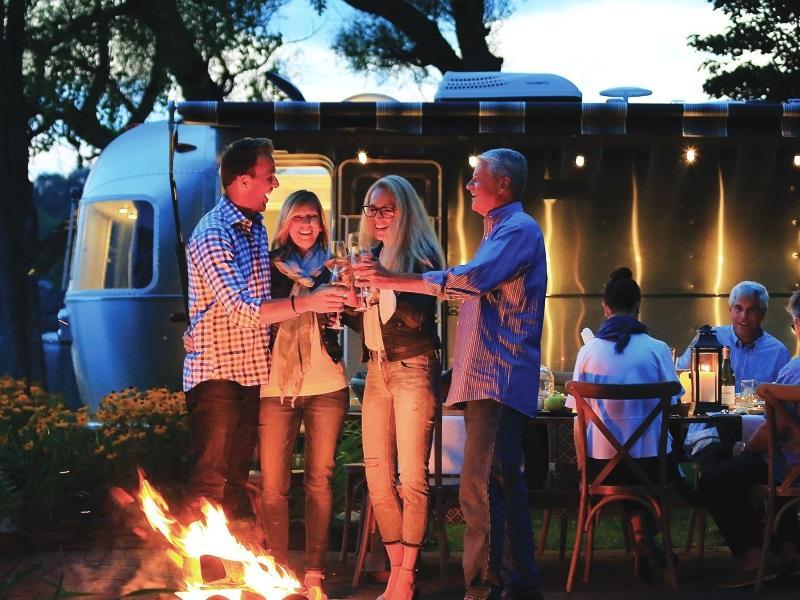 RVers and non-campers alike know an Airstream trailer when they see one. They’re iconic symbols of adventure and tenacity in American culture and built with our commitment to exploration in mind. For over 80 years, Airstream has been a pinnacle of the RV world, and sometimes, it’s fun to roll back the clock and check out some of the highlights of their past. We’ve provided a brief history of the company and also offer a wide selection of Airstream RVs here at Airstream of Montana in Missoula, Montana, serving Bozeman. For your exclusive tour of available options, stop in today and let our experienced staff give you the full tour.

Founder Wally Byam–aptly born on the 4th of July, 1896–was no stranger to camping as a child. His mobile camping contraptions evolved from wooden wagons to a Model T chassis with a tent on it, until finally building a proper teardrop trailer. While all this initially was just to enjoy camping and give his first wife a more comfortable experience, it soon sparked a business idea.

Byam published the design for the teardrop trailer in Popular Mechanics and soon became inundated with requests from interested buyers. In 1931, Airstream opened its first factory. It was a time for recreational travel and camping and Airstream was one of many companies to begin filling the high demand for travel trailers.

That all changed after the financial crash of 1929. Many companies closed their doors during the Great Depression, and then received no reprieve from WWII, when aluminum grew difficult to come by. Even more companies closed up shop for good, and Airstream temporarily shut its doors for the duration of the war. But Byam wasn’t resting. He worked at Curtiss Wright Industries, where he further developed and improved the trailer design using skills he gained from his temporary employer. He even built a trailer called the Curtiss Wright Clipper.

The economic boom after the war helped fuel even greater growth for the company after they reopened their doors. So much so, that they needed to find a bigger manufacturing facility and moved to their current home in Jackson Center, Ohio. Byam took advantage of these profitable years to innovate and improve the Airstream models. In 1958, they developed the first “self-contained” travel trailer with hookups and a hot-water system. Unfortunately, in 1962, Byam passed away and the company was forced to continue its journey without him.

1969 saw the trailers’ first major redesign in over 30 years, creating a more aerodynamic shape, one that’s more recognizable today. In the same year, NASA commissioned Airstream to build a “mobile quarantine facility” which was designed to hold the astronauts returning from the moon to ensure they brought back no diseases.

The decades that followed saw Airstream take even more risks and create more innovative products. Even the oil crisis of the ‘70s couldn’t slow them down. The company released its first line of motorhomes in 1974 and also expanded its influence on a global scale. Management finally started to stabilize since Byam’s passing and the Airstream was officially becoming a true American symbol.

The trailers got another facelift, growing bigger and more comfortable while still maintaining the performance aspects that many Airstream enthusiasts love. They broke into the new millennium as successful as ever and with even more ideas for the years to come.

A Bright and Thriving Future

In 2004, they launched a line of motorhomes featuring Mercedes-Benz® chassis, an unprecedented collaboration and one that continues to set the bar for luxury touring coaches. In 2006, the company celebrated its 75th anniversary, with 65% of the Airstreams built after inception still on the road, including some of the original trailers from the ‘30s.

In the last few years, Airstream has released models that come with Smart Control Technology, which allows you to adjust and monitor many of the features right from your phone. And these are just the most recent improvements. As a company with a reputation for continuous innovation, you can bet there are future models with upgrades we couldn’t think of in our wildest dreams.

After all this, you’ve probably got Airstream fever, and the only prescription is to check out some Airstreams for sale! Stop by Airstream of Montana and we’ll give you an exclusive tour of these iconic campers so you can find one that’s right for you and your family. We welcome all current and future RV owners from Missoula and Bozeman, Montana.