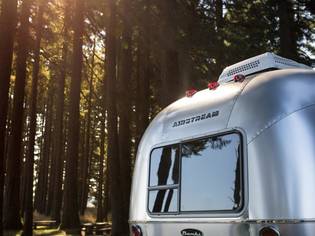 Coca-Cola. Route 66. Baseball. Apple pie. These are only a few of the many cultural icons that are seen as being truly representative of Americana. Let’s add another one to the list: Airstream. Since their development in the 1920s and 1930s, the shiny silver-colored aluminum travel trailers have dominated the United States highway system and captured the imaginations of countless travelers filled with the spirit of wanderlust.

With this kind of perennial appeal, it’s no wonder that the Airstream has found its way into many elements of American culture, showing up everywhere from political campaign trails to Hollywood movie sets. Airstream of Montana, located in Missoula, is your Montana Airstream dealer. Here are some of the many unique ways that Airstream has impacted American pop culture over the last several decades.

The founder of Airstream, Wallace Merle “Wally” Byam, was born in Baker City, Oregon, in 1896. He began to develop his own travel trailers during the 1920s, beginning the Airstream brand in his own Los Angeles, California, backyard. His models were intended to be pulled by the Ford Model T, the era’s most popular automobile.

The Airstream Company itself was formed in 1931, and the iconic aluminum-finish, bullet-shaped Airstream travel trailer was born from a collaboration between Byam and aircraft designer William Hawley Bowlus, who had worked on the iconic aluminum “Spirit of St. Louis” aircraft that had been flown across the Atlantic Ocean by Charles Lindbergh in 1927.

To promote his trailers, Byam took groups of Airstream owners on international adventures, including a dazzling African trip from Cape Town, South Africa, to Nairobi, Kenya, in 1959. He and his wife Stella had previously traveled through Europe in a Cadillac-towed white Airstream trailer in 1956.

That same year, the Wally Byam Caravan Club was born, with the word “International” appended later. The club was founded in Kentville, Nova Scotia, and boasts over 6,000 members today, although more often under the moniker Airstream Club International.

If you’re a movie buff, you’ve undoubtedly seen more than one Airstream in a feature film. The attractive shiny exterior is instantly recognizable and looks great on camera, so a number of different productions have included them. Airstream trailers show up in the movies What’s Eating Gilbert Grape (1994), Independence Day (1996), Mars Attacks! (1996) and Legally Blonde (2001).

Not only are Airstream trailers in films, but they’re also popular amongst Hollywood celebrities. One of the most famous fans is actor Matthew McConaughey, who lived in one for many years before purchasing a house where he keeps the three(!) Airstreams that he currently owns. And actor Mark Harmon uses a vintage 1957 Airstream trailer that he restored himself as a dressing room on the set of his popular TV show NCIS.

A number of United States presidents, vice presidents and their families have traveled in Airstream trailers, whether it’s been on the campaign trail, as a means of taking family vacations or as a meeting room or office space on the road. President John F. Kennedy famously used an Airstream as a mobile office in New Mexico, while former First Lady Laura Bush lived in an Airstream while visiting troops stationed in Afghanistan. In fact, the United States Army often uses Airstreams in their Air Force cargo planes to transport VIPs like former Defense Secretaries Chuck Hagel and Leon Panetta.

We can’t talk about the legacy of Airstream without talking about NASA. The space program of the 1960s made widespread use of the travel trailers, including the Astrovan, a modified 1983 Airstream Excella motorhome that is used as an astronaut transfer van between the Operations and Checkout Building and the launch pad at the Kennedy Space Center.

During the Apollo era, NASA had concerns about lunar contaminants following the first expeditions to the Moon, so it kept a low-pressurized and ventilated Airstream trailer as a mobile quarantine facility (MQF) on the aircraft that transported the astronauts to Houston, where they lived and communicated with their families and even President Richard Nixon until they were transported to another quarantine facility for 21 days before being released. The MQF was retired following Apollo 14, but for many years, this Airstream was a necessary component of the space program.

Want to become a part of a true American legacy? Stop by our dealership in Missoula to check out our full stock of new and used Airstream trailers for sale in many popular styles. Airstream of Montana proudly serves the city of Bozeman, Montana.