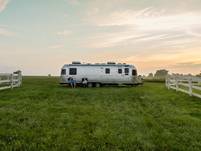 Recreational vehicles have been around for nearly a century at this point, which means that several generations of them have existed. Many of those earlier models are still around, including iconic Airstream travel trailers from decades past. Airstream of Montana, serving the city of Missoula, is your local Airstream dealer, so we’ve provided a brief look into the history of recreational vehicles and of the different types of vintage RVs you may see on the interstate during your own travels.

The earliest RVs include the Pierce-Arrow Touring Landau, which appeared in 1910, just after automobiles were invented. New Yorkers flocked to Madison Square Garden’s auto show to see this luxury vehicle that had a fold-out sink and bed with a “potted toilet.” They were built upon carriage designs during a transitionary period between horse-drawn vehicles and motorized vehicles, which would soon take over.

The 1913 Earl travel trailer is a very early example of a modern RV. It came about around the same time as Auto-Kamp pop-up trailers, which were designed in Michigan from 1910 into the 1920s. These early models were equipped with just the bare-bones basics that allowed people to take long-distance trips for much less money. In fact, the early days of recreational vehicles kind of resembled the covered wagon travels of the 1800s.

You probably won’t see many of these designs nowadays, since they were primitive at best by our standards and it would be hard to upgrade these little touring coaches.

Recreational vehicles truly hit their stride after the travails of the two World Wars and the Great Depression had ended. Post-war Americans had more money to spend and a budding highway system was making it easier than ever to travel across the United States on well-paved roads with helpful signage.

This era saw the development of the first motorhomes, which were all-in-one designs that had an engine in the RV itself so that no automobile was needed to tow them. Class B campers were built on car and truck frames and allowed for simple living on the road. Soon, the bigger and taller Class C and Class A styles followed, making for more residential-style RVs. Some popular brands from this era include Winnebago, VW and Westfalia. You’ll see a lot of restored RVs from this “golden age” of recreational vehicle travel, since they were constructed with more modernized features like full bathrooms, kitchens and electricity.

Of all the vintage RVs out there, none have stood the test of time quite like the Airstream has. Ever since the Airstream Company started in 1931, the iconic silver bubble design has won fans all across the United States and become a symbol of wanderlust for many Americans. In fact, an incredible 70% of all Airstreams ever produced are still driving across our highways to this day, representing the durability and timelessness of these incredible RVs.

The high degree of attention to detail combined with a virtually indestructible aluminum exterior makes it possible for owners of vintage Airstream travel trailers to continue to operate their vehicles even after years of use. Many choose to completely renovate the interiors of old models to make them more in keeping with modern needs, while keeping the same sturdy aluminum framework that’s instantly recognizable on the road or at the campsite.

Devoted Airstreamers actually take great pride in the careful restoration and maintenance of older models, allowing them to shine as much as they did when they were brand-new. The aluminum finish is instantly recognizable and it doesn’t look dated or worn like other styles do because of its smoothness. If you want a vintage RV that will last you a long time, go with an Airstream!

Visit our Missoula, Montana, dealership today to check out our full stock of new and used Airstream travel trailers for sale. Airstream of Montana proudly welcomes all of our Big Sky Country customers, including those in the city of Bozeman.